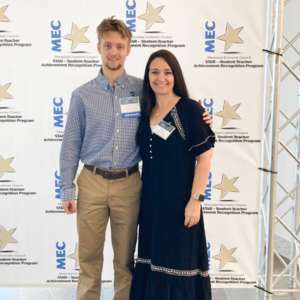 Established in 1965, the STAR program recognizes outstanding students and teachers in Mississippi. To be eligible for this distinction, a senior must have an overall ACT composite score of at least 25 and an average of 93 or above in selected subjects in 9th-12th grade courses. Carson made a 35 on the ACT, the highest composite score for the school.

“It is a great honor [to be named a STAR student] and I was proud to represent Corinth,” Carson said. While he is undecided on his college choice, he plans to study economics with a law emphasis in preparation for law school.

Three hundred and twenty STAR students across Mississippi were recognized during a luncheon in Jackson, MS, on Thursday, April 14. Each STAR student received a medallion, lapel pin and a certificate of achievement. The top three students received scholarships from The Kelly Gene Cook Sr. Charitable Foundation, Inc.

Each STAR Student is asked to designate a STAR Teacher—the teacher who has made the greatest contribution to the student’s scholastic achievement. Carson chose Mrs. Polly Johnson, an English teacher at Corinth High School. She holds a bachelor’s degree from Lambuth University and this is her 10th year of teaching.

Their respect and appreciation for each other is mutual. “I would describe Carson as ‘absolutely brilliant’! I had the pleasure of having him in class for two years and he challenged me as a teacher; I truly appreciate that,” said Polly Johnson.

According to Carson, “I developed a much greater understanding and appreciation for the English language while in Mrs. Johnson's class. From the very first day, I could tell she loved to teach and inspire. I did and still love to ask her thoughts on my random grammatical thoughts. For example, is metaphorical distance farther or further?”

At CHS, Carson is involved in Mu Alpha Theta, National Honor Society (NHS), Future Business Leaders of America (FBLA), Historical Society, Science Club, and Academic Team. “So far, I have thoroughly enjoyed the entirety of my time at CHS; however, if I had to pick a favorite time, it would be my sophomore year when I was taking AICE Divinity, Chemistry, and U.S. History. This made for a challenging but rewarding experience,” said Carson.

Congratulations, Carson and Mrs. Johnson on being named 2022 STAR Student and Teacher!